First off, just a heads up that we’re speculating here and calling out spoilers from The Walking Dead comic and S7 trailer, so you’ve been warned…

As The Walking Dead descends on New York Comic Con, (complete w/ absent Andrew Lincoln pranking Norman) we grab the popcorn and hit “play” on the Season 7 Premiere sneak peek of “Right Hand Man,” and it does not disappoint! Watch below and let us know what you think!

There are sooooo many thoughts coming out of this, but the intense stares between Rick and Negan are about perfect. So, let’s dive into where we think this could go…

Clearly someone’s dead and, unlike the cliffhanger of the S6 finale, we are going to (read: Oh, we better!) find out whose blood is dripping from Lucille. My bet is Abraham and Glenn, and while I wouldn’t call either of them Rick’s “right hand man,” I don’t think the title of the episode is a shout-out to that, but something even bigger coming that dates back early in the comic. 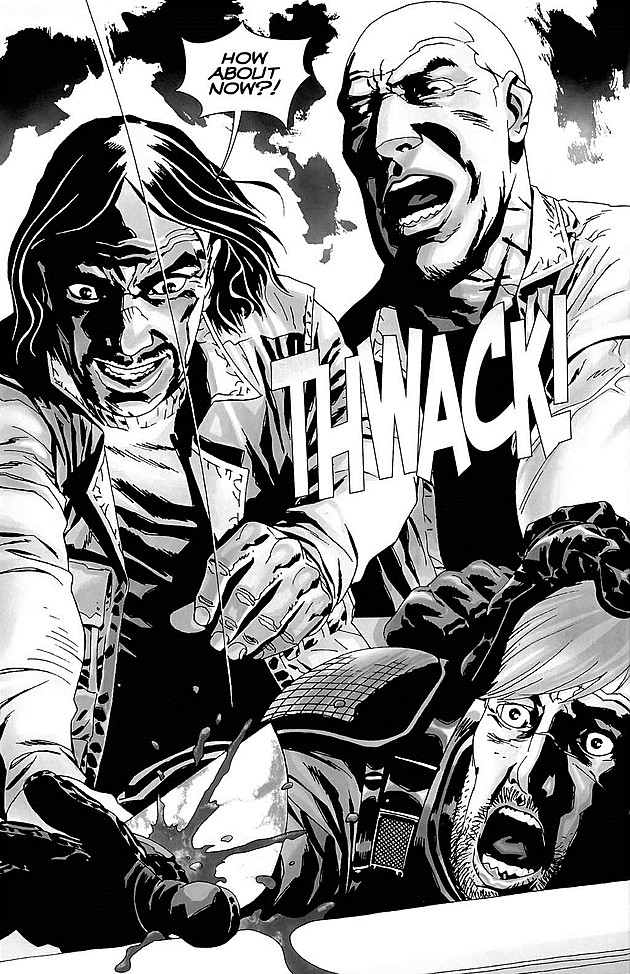 A year ago showrunner Gimple stated to The Hollywood Reporter, “I’ll give you an absolute because I’ve been dealing with a lot of ambiguity in storytelling here in protecting the story: Rick’s hand is safe. You can proclaim it from the mountaintops: His hand is safe! He will be wrapping it. There will be some ointments involved.” Not sure that’s going to be the case this season. Negan’s taking of the hatchet and the dragging of Rick into the RV is again a foreshadowing of a darkness that Negan, in all his sexiness, is going to continue to bring to TWD, and I, for one, am ready for the shakedown! Speaking of RVs, Atlanta Movie Tours may have a little RV fun coming at you pre-Walker Stalker Con Atlanta!

Now, don’t get me wrong, everyone has their favorites, some character-based, some actor, but if Gimple, Kirkman, Nicotero, Hurd, and Alpert want us to continue to be invested in this, they have to show that everyone and everything in this post-apocalyptic world is expendable. Sounds like they’re really going to bring it with Season 7 based on what they said at NYCC. Now it’s time to get that popcorn ready and hang on tight for one heck of a season. What better way to do that than going on a special tour hosted by IronE “T-Dog” Singleton, watching the premiere at Battle & Brew after an awesome Big Zombie 1 tour, or joining us at Walker Stalker Con and the epic House of Payne Halloween Party?!?

Plenty to see, catch up on, play, etc. here on AMC.com