Richard Jewell, The World Will Know His Name and The TRUTH 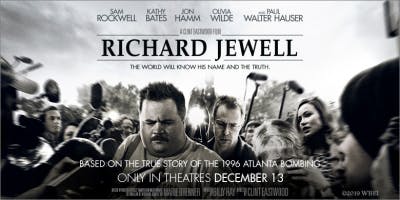 Everyone give Georgia a hand! I am very pleased that this is a Georgia story, told here in Georgia tonight for the FIRST time that was also FILMED here in Georgia!”

– David Ralston,  Speaker of the Georgia House of Representatives and Proponent of Georgia’s Film Industry

Georgia Speaker of the House, David Ralston opened the evening singing glory, glory to Georgia Film and we could not have been more excited to sing along as he introduced a true icon and national treasure, Mr. Clint Eastwood and his 5th film to be made here in the state of Georgia, Richard Jewell. 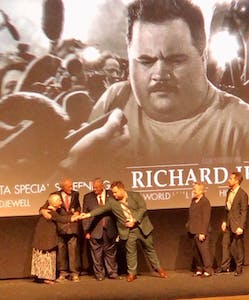 Cast-mates Sam Rockwell, Kathy Bates, Jon Hamm, and Paul Walter Hauser also graced the Rialto Theatre stage, but the true star to steal the show that evening was none other than Bobi Jewell, Richard Jewell’s mother, who when hugging Eastwood stated, “My son is looking at you!” ..a moment that the entire theatre seemed to pause in awe. She went on to thank everyone for attending the screening and supporting Eastwood claiming, “I’m a Jewell, but he is also!”

In addition to Bobi Jewell, Eastwood introduced Nadya and Watson Bryant who both figure very big in the Richard Jewell story and ultimately helped Jewell get out according to Eastwood.

When introducing the film, Eastwood stated this was a project he chased after for years because he considered the misinterpretation of Richard Jewell to be one the Greatest American Tragedies witnessed in his lifetime. Eastwood made it his sole mission for the world to know Richard Jewell’s name and the TRUE story of the 1996 Atlanta Olympics Bombing.

Eastwood accomplished just that and MORE with his RIVETING reveal of the REAL Richard Jewell and the truth behind Jewell’s role in the ’96 Atlanta Olympics Bombing, a true HERO! This film was both heart wrenching and warming considering the superb storytelling by it’s all-star cast featuring Sam Rockwell as Watson Bryant, Kathy Bates as Bobi Jewell, Olivia Wilde as reporter Kathy Scruggs, Jon Hamm as FBI agent Tom Shaw, and Paul Walter Hauser as lead Richard Jewell. All of which were AWARD WINNING worthy performances. So much so, Kathy Bates received a Golden Globe Awards nomination for Actress in a Supporting Role in a Motion Picture days prior to the film’s official release.

We at Atlanta Movie Tours could not be more proud to have such a captivating work of art representing Georgia Film world-wide and look forward to sharing locations from this film on future tours. Richard Jewell will release nation-wide THIS Friday, December 13th.  We would also like to thank our #GeorgiaFilm friends at Allied Atlanta for allowing us to take part in this special screening event.

Richard Jewell is the story of an unsung american hero, the story of a great and fascinating chapter of this city (Atlanta) and this state (Georgia) brought to you by a TRUE icon, Clint Eastwood. Richard Jewell should be a name we should celebrate..because of Jewell, countless lives were saved during the 1996 Olympic Games.”

– David Ralston,  Speaker of the Georgia House of Representatives