Last week, hotels in and around Atlanta were filled with people attending Dragon Con. Now, as Hurricane Irma makes its way up the southern coast of the US, those same hotels are filled with evacuees from Florida, southern Georgia, and with others who had been hoping to outrun Hurricane Harvey. Today, Atlanta Movie Tours shut its doors and, along with the rest of Atlanta, is bracing for the dying storm to hit.

Businesses across the city have closed after Governor Deal declared a state of emergency in Georgia. This means that filming across the state and region has also halted, shifting the production schedules for many upcoming movies and shows. It was announced yesterday that SAG-AFTRA (Screen Actors Guild and the American Federation of Television and Radio) offices in Miami and Atlanta would be closed today and that the majority of film sites would shut down.

In Senioa, GA, The Walking Dead has stopped production for the day, pushing filming for the eighth season back a day. As the storm rages north, we may see that schedule moved back several days depending on damage sustained to the areas in and around Senoia where the Alexandria Safe Zone is still being used. In addition to the official Walking Dead schedule changing, The Woodbury Shoppe in downtown Senoia released that the Walking Dead “superfan” documentary that was supposed to be filming would be pushed to Wednesday September 13th from 9:00am-11am. The Shoppe is still calling for fans to come down, on Wednesday, cosplaying their favorite characters or as themselves for a chance to be featured in the film. 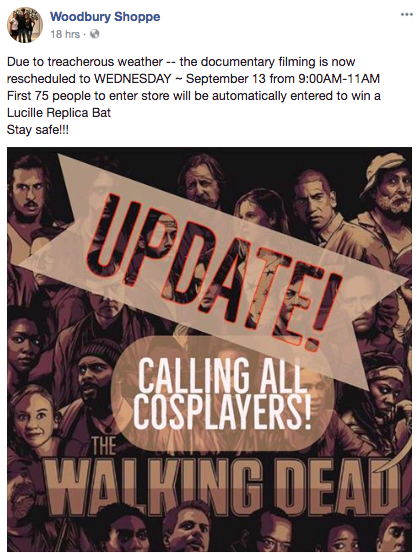 Filming in downtown Atlanta has also been affected by the storm, causing Ant-Man and the Wasp to pause shoots in Castleberry Hill near our Atlanta Movie Tours shop. When the filming originally started in Atlanta, the last thing on the minds of those on set was that a hurricane would stop filming. The crew rallied together to join Marvel Studios in a Day of Giving to donate to those affected by Hurricane Harvey, and now they are waiting out Irma.

Ant-Man and the Wasp are not the only superheroes trying to help with hurricane relief efforts. From the set of Deadpool 2, Ryan Reynolds encouraged fans to buy t-shirts for the relief funds, or to forgo the shirts altogether and donate straight to Americares or to Charity Navigator. 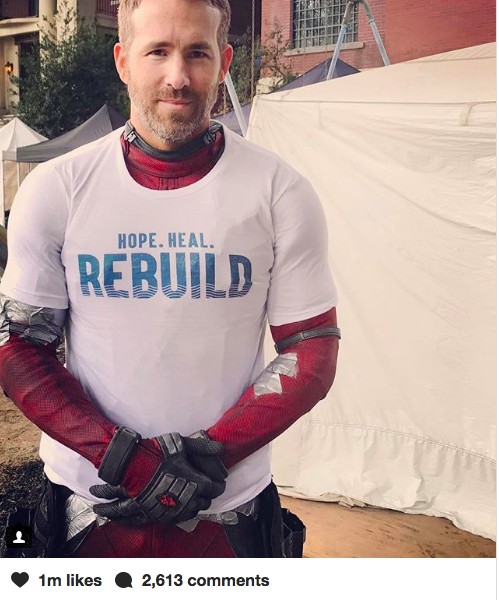 Hurricane Irma and Hurricane Harvey have disrupted movie sets across the region. In the Guadeloupe, Death in Paradise was shut down as Irma ravaged the surrounding areas, and in Florida and Georgia, we wait to see how devastating the final damage will be. But actors on film sets are not the only superheroes emerging from these storms. Join Atlanta Movie Tours in donating supplies, money, and time to organizations like americares.org or in using sites like charitynavigator.org to find other charities in need of donations for both Hurricane Harvey and Irma. In your research, don’t forget that city-based charities like Florida Urgent Rescue (FUR), The Atlanta Rescue Mission, or The Greater Houston Community Foundation are in need of donations as well.